Sadly our series of dressage competitions is over for another year but it does mean that spring and summer are finally on the way after all the very cold weather! We have had excellent support throughout from a much greater number of individual riders from all around the Greater Bristol area during this series so it was great to be able to welcome lots of new faces as well as those who have supported us for many years.

We were actually very fortunate overall with mainly dry, albeit often pretty cold Sundays except for our Christmas competition in December that sadly had to be cancelled due to the snowy conditions.

Throughout the series we keep a record of all the results for each competitor so that we can award trophies and special Championship rosettes to those who have accumulated the most points in each of the first four Classes (there have not usually been many riders in Class 5).

Points are awarded as follows:

On April 8th the following lucky people had been calculated the winners of each Class Trophy to keep until March 2019 once they have been engraved. All the beautiful rosettes for this particular day were sponsored by Julia Faulkes’ company JuMelia. We are looking for more sponsors for the next series so if you know of any company that might be willing to help us in this way, please ask them to get in touch.

Thanks to Jo Brewerton taking over the running of our café, we were at last able to offer some hot food that was much appreciated by competitors and their supporters as well as our team of excellent volunteers that run this whole series to raise money for our very special riding centre. 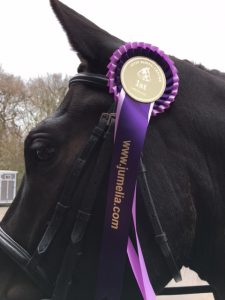 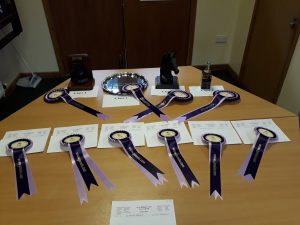 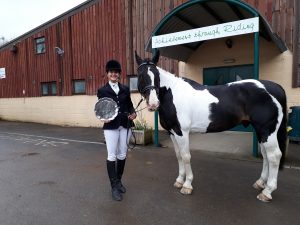