Clare grew up riding horses, it was where she was most relaxed and happy that was until 2009 when she became suffering from extreme chronic migraines and severe lower back pain. Every day for 18 months Clare had headaches and when she tried to ride the stiffness in her spine resulted in them being more painful. Unfortunately she was forced to give up horse riding, one of the most important ingredients to her wellbeing, she then became diagnosed with severe clinical depression and anxiety in 2011. During that year she became very ill and was suffering from Chronic Fatigue Syndrome (CFS), it was this diagnosis that gave Clare an understanding of herself and she started getting the treatment she needed. Working with her physiotherapist, Clare managed to get her migraines under control and she received a lot of help in managing her chronic fatigue, however she knew that horses were missing from her recovery. She would never feel complete mentally, emotionally or physically until she could go horse riding again. Fear kept Clare from trying, if pain was still there when she tried horse riding she would be heartbroken having her passion taken away from her again.

In 2015 Clare visited Badminton Horse Trials, it was here that she found out about Avon Riding Centre as they were at the RDA stand with the horse simulator. Clare and her husband spoke with Kim, the Centre’s RDA Co-Ordinator, who sewed the seed for Clare to try riding again. After speaking it through with her husband and physiotherapist Clare found the courage to get back on a horse.

On her first session at Avon Riding Centre, Clare rode the horse simulator, who she christened, ‘Eric’. The session was kept short as stiffness began rising through Clare’s spine. Following the session she saw her physiotherapist who was also a keen horsewoman. They spoke through what Clare had found from her session with ‘Eric’ and her physiotherapist agreed it would be best to accompany Clare to her next session. Using the simulator enabled Clare’s physiotherapist to be alongside her and see how the walk and trot motion affected her posture and triggered muscle spasms. Clare’s physiotherapist was able to suggest trying shorter stirrups and longer reins, this enabled Clare to settle and she didn’t get stiff or have a migraine triggered. After 6 months of working with ‘Eric’ Clare had strengthened her core and could then get onto a real horse.

Marge was Clare’s first ride. They had a walk around the arena together on a lead rein then Clare took control and rode Marge on her own. The tears started as Clare’s dream of riding again had come true. After a few months of having lessons Clare’s friends began to notice a difference in her, they weren’t aware that she had started riding again but noted she seemed happier, as if she was glowing.

After a year of walking Clare was encouraged to try trotting by her coaches. She could manage a few strides but anything more would trigger pain. Working on this it was only a few months after that Clare begged to have a canter! The rocking motion of the canter mirrored the walk and as long as Clare didn’t canter for too long it did not trigger any spasms or headaches!

Clare’s CFS still prevents her from walking too far as it will trigger lower back pain and migraines. Everyday tasks deplete her energy which means she has to plan and prioritise everything to the smallest detail but after riding at Avon Riding Centre she notices a significant decrease in her physical symptoms and a lift in her mood and general well-being.

Throughout her time at Avon Riding Centre, Clare has built relationships with fellow riders, the staff and volunteers, as well as the horses. She is surprised at the benefit that this has also had, giving her more happiness and fulfilment.

Over the summer Clare made another amazing accomplishment. She went out for a hack with her coach and had her first gallop in 10 years! Never did she think this would be possible.

Clare says, “I cannot express what the RDA and Avon mean to me. I can say with my hand on my heart, that without their facilities, professionalism, kindness and expertise I would have NEVER ridden again. I would never have gotten back a most vital part of what makes me happy and healthy. Avon continues to help me achieve my dreams which is to enjoy riding again with no pain or pressure. I may only walk with the very rare canter or gallop thrown in for a treat but I am completely whole again and along the way I have made some amazing, beautiful friends.”

If you are interested in volunteering please email our Volunteer Coordinator, Claire Mill – centreadmin@avonridingcentre.org.uk 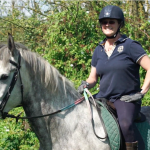 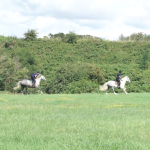 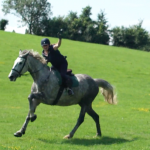 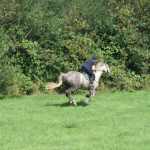